Stop rust in its tracks! Our 2 Piece Rust Encapsulator Kit has been formulated with SUPERIOR corrosion resistance to "hardware store rust paints"!

Rust Encapsulator seals and stops rust and corrosion from spreading, but it performs even better than our original formula. Tested against well-known brands, the Eastwood Rust Encapsulator has proven to be superior in sunlight resistance, preventing rust creep, and overall durability.

Eastwood Rust Encapsulator has been tested by an independent lab to be one of the most effective rust-preventive products yet. Rust Encapsulator is a great primer for floor pans and other under-body parts. It fills tiny pin-holes and surface irregularities, and is compatible with lacquer, enamel and urethane topcoats (including Eastwood Chassis Black). For the absolute ultimate rust remedy, first brush or spray-on Eastwood Rust Converter, then prime with Rust Encapsulator. Contains no isocyanates. Heat-resistant up to 400 degrees F. Made in the USA.

Use a wire brush to remove loose rust, scale and paint, and remove dust, grease and oil deposits. Feather surrounding paint with 220-grit sandpaper. Brush-apply directly from the can, thin 20% with lacquer thinner to spray, or use the aerosol. A single coat dries to the touch in 20 minutes, and is thoroughly dry in 3-4 hours at 68 degrees F. For greater durability, a second coat can be applied 1 hour after the first. Allow 6-8 hours after the last coat before applying topcoat. Use over or under body fillers. 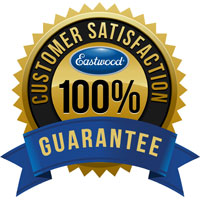 In places where little or no surface prep can be done, our Internal Frame Coating or Heavy-Duty Anti-Rust (16017ZP) is actually a better choice for applying into blind areas such as box sections. 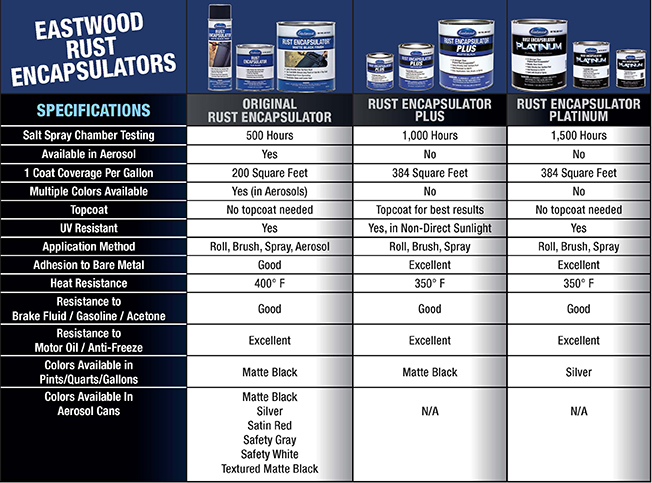 We care about your DIY automotive projects and want you to be 100% satisfied with our products.

This item carries our 90-Day Warranty on Material, Workmanship and Defects

Eastwood is here to support your project with FREE Technical assistance