Accurately cutting steel and other metals is typically a long, tedious process of sawing, grinding or some combination of the two. Unless you have a full-service metal shop with hydraulic shears and punches, the old by-hand method is the most commonly used way to cut metal. While chop saws, reciprocating saws and cut-off wheels have their place, the plasma cutter is the fastest method for making quick, accurate cuts in everything from thin sheet metal to 2" plate and tubing. Understanding how plasma torches work and what makes them not work is crucial for proper operation.

Plasma arc cutting is similar to electric welding, except instead of joining, it separates. In the 1960s, engineers found that they could turn up the gas on the electronic welders in order to increase the speed of the welding operations, but they reached a point where the torch ceased welding and began cutting. This discovery led to plasma cutting torches. These cutting devices employ an electric arc with compressed air discharge at the tip of the cutting torch. The arc super-heats the compressed air, which then forms plasma. There are 4 forms of matter: Solid, Liquid, Gas and Plasma. When a gas is heated to extreme temperatures, the energy begins to break the gas molecules apart, splitting the atoms, which generates massive amounts of energy and incredible cutting power. Plasma is all around us; neon and fluorescent lights used cold plasma, while the sun is essentially a giant ball of plasma. Since plasma conducts electricity, it cuts very fast with very little effort.

To generate the plasma, you need a starting arc. This is what creates the initial burst of plasma at the tip. There are 2 common types of starting arcs: High-Frequency Contact and Pilot Arc. While both are certainly functional, there are certain concerns with both. HF arcing is perfectly suitable for most types of plasma operations, but the high frequencies generated by the machine can wreak havoc on nearby computers and other sensitive electronics, making them really bad choices for CNC plasma plotters. While that may sound like only an issue for industrial applications, there are affordable hobbyist CNC plasma tables. Should you purchase one at a later date, you would need to shield the computer from the HF noise. HF units also require that the tip be in contact with the substrate to be cut in order for the arc to trigger, which can lead to blown-out tips and can be tricky for use in CNC tables. "Pilot arc" units use an internal lower voltage arc that generates plasma inside the tip of the torch. This eliminates the need to touch the tip to the substrate, meaning the consumables last longer. Since the arc is generated internally, these units do not generate high-frequency noise, which makes them safe for CNC use.

The drawback of the pilot arc is that if you repeatedly trigger the unit without being in close proximity to the substrate, you can damage the internals of the unit. That said, the pilot arc design is becoming the leader in plasma torch designs.

Plasma may be the meanest method of cutting, but sometimes the biggest dude on the block has a glass jaw. Plasma cutting's kryptonite is water. Obviously, you would think twice before using anything electronic around water, but what we are talking about is water/moisture in the compressed air. Most hobbyists employ a standard air compressor to generate the air needed in the plasma cutting operation. Compressed air typically has a lot of moisture in it, so you need to make sure that there is at least one water trap filter in the air line. A quick, easy way to dry the air is to use disposable air filters with a quick-release right at the connection to the plasma unit. You will know you have water in the line if the cutting operations are erratic, with lots of pops and sputtering. Plasma HATES water, so keep it out.

Air pressure is also an important issue with plasma operation. Too much air can blow out the plasma; not enough air and you can't actually cut anything – the torch will just melt the metal into a mess. Follow the guidelines on your plasma torch to ensure you have proper air pressure for quality operation.

A good ground is extremely important for plasma cutting. First, the arc won't sustain itself if there is not a solid ground. Secondly, especially when working with large objects that you may be sitting on, a bad ground can mean you become the path to ground. We have heard some pretty ugly stories of what happens when a user gets zapped. Don't get zapped – practice safe plasma.

Safety is a priority whenever you are dealing with extreme heat, light, and electricity. Use heavy welding gloves along with a welding coat or sleeves to protect your skin. TIG gloves are not thick enough to protect against the extreme heat. Plasma torches create heat in the 45,000°F range; it will shrivel MIG gloves if you get too close.

The light coming off a plasma torch is not quite as bright as a MIG or TIG weld, but it is still enough to blind you. Gas torch goggles with #10 shades are suitable, but some prefer #9 or #11. The point is that you use proper protection for your eyes. An automatic welding helmet with adjustable settings is even better; that way you can clearly see the set-up and won't have any visibility issues.

Another key point of safety is hearing protection. Plasma cutting tends to be a fairly loud process, with the compressed air release. If you are just cutting a small section, it isn't a big deal, but if you are doing a lot of cutting, a set of earmuffs or plugs is a good idea.

There are several ways to use a plasma torch. The most common is dragging. It sounds just like what it is; the torch is dragged along the metal. This comes with a caveat, however, as you can't just touch the tip to the metal and go. You need a barrier to keep the tip from fusing to the metal and blowing out the tip. Depending on the style of torch you have, you may need to simply hold the torch a 1/4" above the metal. This means accurate cuts require moving a little slower. Drag cups allow you to rest the torch on the metal while you follow your cut line, increasing the accuracy and ease of cutting. When operating a torch without a drag cup, the best results are often found by starting the cut at a 45° angle. This will blow the molten material away from you and the cut. Thin metal pierces quickly and a straight-on approach works, but to aid visibility of the cut, holding the torch at an angle allows you to see the arc much better.

Cutting thick metal is a little different than cutting sheet metal. Thick metal means slower cutting, wider cut or "kerf", more slag remaining (the leftover molten metal on the edge of the cut), and longer pierce time. If you are piercing the metal, the 45° angle is vital. A straight-on approach will result in lots of slag on the tip, and more importantly, a rain of fire all around the torch. The molten metal has to go somewhere – make sure it is away from you. When starting on the edge of the metal, a straight-on approach works great.

Once a cut is completed, there will be some amount of slag left on both sides of the cut. Most of the time, this can be chipped off with a hammer and chisel. Thicker metals produce more slag, and often it is harder to remove, requiring a grinder to clean it up. Gouging is another technique commonly used on thicker metals to remove brackets, rivets, and welds, as well as to create grooves in plate metals. This is not necessarily a big need for automotive use, but it certainly has its place. Gouging is performed by holding the torch at a low angle to the metal, triggering the arc and carving a groove. This technique takes a lot of practice to get right.

Plasma cutting is also quick and easy way to notch tubing and angled metals. When you are joining tubing, a standard chop saw can't make the scalloped cut needed for a flush fit, and joint notchers require expensive hole saws and precision settings that are not always easy to get right the first time. Using a plasma torch to cut out the scallop means faster work and getting the job done with ease.

Setting up the machine

Most plasma cutters are not automatic; there are a couple of settings that can be adjusted to change the output of the machine. We already discussed the air pressure, which is typically set around 60 psi. The main adjustment is the voltage. You can use a plasma cutter on its highest setting, but this will result in erratic cuts with lots of slag on thinner metals. Use an appropriate voltage for the metal you are cutting. Steel needs more heat than aluminum, and thicker metals require more as well. Rusty metal, such as sheet metal, tends to pop and sputter, so adding a little more voltage can help blow through the rust. Most plasma machines are set so that the lowest voltage works for the thinnest metals and the highest is for the thickest metals. If you don't have voltage-to-thickness reference, use the machine's range as your guide. Since thicker metals require more voltage, having a 220-volt wall plug is quite nice.

Eastwood's Versa-Cut Plasma Cutter has dual-voltage capability, which allows the use of either 115v or 220v circuits for easy operation in just about any situation.

Accessorizing your plasma torch is fairly simple. Drag cups are nice for working on large flat cuts such as quarter panels and floor pans. Always make sure you buy extra consumables for your torch, since nothing is more frustrating that blowing a hole in a tip and not having one in the box. It is a good idea to check your tip, nozzle and electrode regularly for wear. As the parts wear, the arc becomes erratic and can actually cause more problems. A worn electrode can cause the arc to blow out of the side of the tip...we have seen it happen.

Once you start using a plasma torch, you will instantly wonder why you hadn't bought one sooner. You may even find yourself looking for things to cut up; it's just a lot of fun. As with anything, a little practice with the plasma torch goes a long way to getting the most out of your tool. Learn the techniques using scrap metal and you will soon be an expert in plasma cutting. 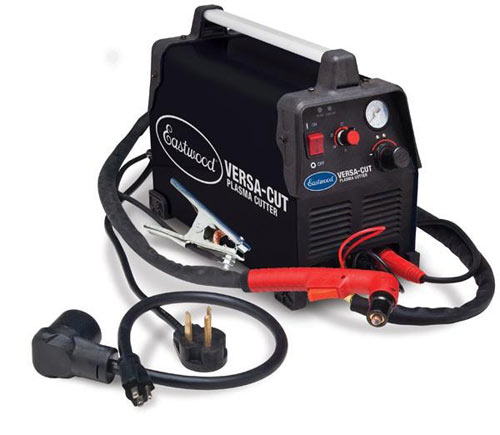 Eastwood's Versa-Cut Plasma Cutters are the professional's and DIY's choice in plasma cutters.