If only such a thing was included in your comprehensive automobile insurance, because rust is a force of nature, and no matter how hard you fight it, it is a losing battle. Rust usually starts where you can't see it, working from the inside out. With changes in temperature and humidity, condensation forms on the often-unprotected inner body cavities. The most rust-prone areas are usually in the lower sections of the vehicle: rocker panels, lower fenders, inside doors, and other areas beneath an imaginary line drawn slightly above the wheel arches.


What can you do? Few people can keep their cars in a perfect climate, so the only practical alternative is to coat and seal those rust-prone inner surfaces. The problem, of course, is two-fold: How do you properly prep? And, how do you reach all those inside panels?


Prep is no longer a problem because Eastwood's Heavy-Duty Anti-Rust uses capillary action to displace moisture and penetrate through existing rust to prevent further moisture and air from reaching the surface. Heavy-Duty Anti-Rust is a waxy, oily product that eventually dries as hard as candle wax. This product also works well to lubricate internal window mechanisms and leaf springs. The aerosol version has a short extension wand, but how do you treat a long inner section of rocker panel or door?


Eastwood's Rustproofing and Undercoating System is suitable for spraying Heavy-Duty Anti-Rust and Eastwood's Rubberized Undercoating (both included) in out-of-the-way areas. Includes 16" rigid wand, 2 flexible wands, plastic bottle, gun assembly, Unibit drill bit, 25 plugs, and 1-qt. each of Anti-Rust and Rubberized Undercoating. This gun works best at 40-60 psi (requires 5-6 cfm). The various extension wands can usually be inserted into existing openings, or, where no holes exist, a 1/2" hole can be drilled. The Unibit drill bit (included) is a single-flute, shallow-stepped drill that's perfect for drilling a hole near a backing panel. After the treatment, "cap" the hole with a 1/2" plastic plug (included).


Be sure to clear all drain holes located along the bottom edges of most rocker panels and doors, and provide some means to collect the surplus solution that drips out. This surplus can usually be strained and reused.


For inner fender areas, Eastwood's Rubberized Undercoating provides a nicely textured, satin black barrier against stone chips. It's paintable too, so you can match the body color, if desired.

When repairing rust-damaged body panels on your beloved automobile, be sure to remove all possible traces of rust. Rust can be effectively removed by abrasive blasting, chemicals, mechanically removing it (sanding it off), or by cutting out the rust and replacing it with new metal. In some instances, it simply is not feasible to completely remove the rust. For those instances, you will need to use a product such as Eastwood Rust Converter and/or Eastwood Rust Encapsulator. Both products do a great job at preventing rust from spreading and getting worse.


When treating a rusty body panel with Rust Converter and/or Rust Encapsulator, be sure to treat the rust from both sides. Many times body panels rust from the inside out. It doesn't matter how good the rust product you used is—if you only use it on the outside of the panel and do nothing to protect the inside of the panel, the rust inside will continue to spread.


NOTE: In places where you cannot adequately prep the inside of the panel for Rust Converter or Rust Encapsulator, Eastwood's Heavy-Duty Anti-Rust is a great product to use with your spray gun.

This quarter panel did not look too bad from the outside. In fact, it looked like the rust could have been cut out and then small, metal patches welded in. But turn the panel around and look at the the inside and it is obvious the metal was severely rusted (thanks to a mouse nest).

Here is the backside of the panel showing the hidden damage

Had only the outside of the panel been repaired and treated, the panel would have continued to rust from the inside. This rust would have shown up through the new paint job in a short amount of time and destroyed the panel. When dealing with rust, what you see is often only a glimpse of the rust that is hiding in areas you are unable to see. To effectively stop rust, it's critical to treat the rust that you can and cannot see.

Other Uses for Rust Encapsulator 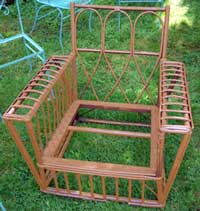 Try a quart of black Rust Encapsulator on rusty wrought iron fences, patio furniture, and lawn decorations to restore them to a like-new appearance.

Outdoor speaker grates rust quickly when exposed to the elements. Give them some sparkle with Silver Rust Encapsulator.

You can also use Rust Encapsulator on garden and hand tools, including hedge clippers, rakes and other rust prone implements. The coating will weather the elements and save you money in replacement costs.

Coat your lawnmower blades and snowblower casing with Rust Encapsulator to keep them looking new.

The gutters, drain pipes and exposed steel beaming of any structure can be coated with Rust Encapsulator for easy maintenance and prolonged usage.

Roof vents, flashing and industrial fans can be coated with Rust Encapsulator to quickly cover existing rust and prevent new rust from forming.

As you can see, Eastwood's Rust Encapsulator has hundreds of household applications. From the garden to the worksite, Rust Encapsulator keeps any rusted metal looking fresh and new for years, without fading, cracking or peeling.