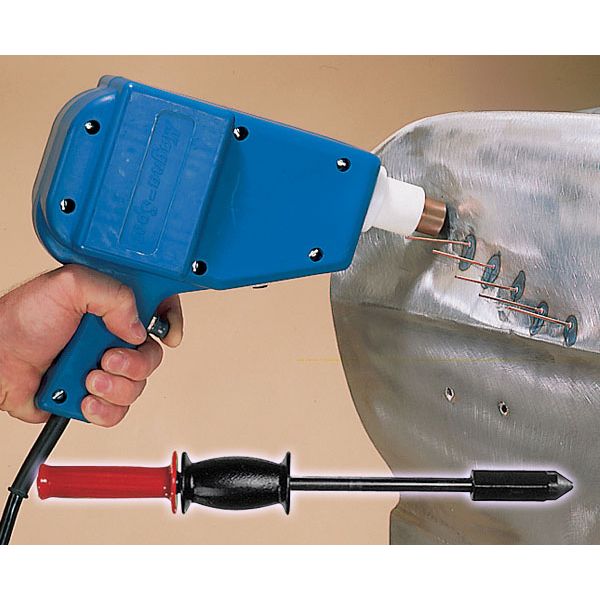 3-step repair works without drilling holes, so it won't compromise the strength of the panel. The result is a professional-looking dent repair that requires minimal filler.

(Q) Do I need a welding mask when using this?
(A) It’s not necessary, but don’t look directly into the momentary flash.

(Q) How do I get the pins off after they’ve been welded onto the surface?
(A) After you’ve made your pulls, simply snip or grind the pins off.

Stray sparks normally occur during use of this tool. Therefore, keep all flammables out of the immediate area.

The Shrinking Electrode Tip (31041 A) turns your stud Welder into an effective tool for shrinking metal. Simply install the shrinking electrode, push the tip fully against the raised spot and trigger the gun for 1/2 second 2-3 times. If dent does not shrink tap lightly with a body hammer.

Rated 5 out of 5 by Anonymous from The easy work this tool make of panel repair. Very easy to use one, two get the metal bumping great book.
Rated 5 out of 5 by New york from Stud gun or dent puller! I’ve been doing body work for 50 plus yrs,this gun is excellent tool thank you for your Dedication in this feel of work!!
Rated 5 out of 5 by Autotech from Great Entry Level Kit Purchased this ti work on my 97 Ford Ranger Project well used and abused. The system works GREAT except occassionally hard to disengage pins from puller. That problem probably lack of experience.
Rated 5 out of 5 by BarryKat from Great Product! I've used this tool in the bodyshop for years! It's a God send! I go far enough back that when mig welders came out we were ecstatic about them too! lol
Rated 5 out of 5 by Vesp from Great products I haven't used my stud puller yet but it's a Eastwood product everything else I have bought from Eastwood has been perfect so I'm not worried about this product
Rated 5 out of 5 by chargerguy from Works just as advertised Works great. Will pay for itself in time saved just on one restoration project. Wish I bought this two projects ago.
Rated 5 out of 5 by Anonymous from Works very well. Another good tool from Eastwood! Works fast and the studs arewell fastened . I can pull dents that otherwise would require major surgery to access the back side of them. Work just like it is suppose to.
Rated 5 out of 5 by Anonymous from Stud welder dent puller saves the day!! The recently purchased stud welder dent puller I purchased from eastwood, saved me time and unecessary damages to, alot of my customers, vehicles,and it has almost tripled my,business. I document all of my Repairs, with photographs, and when, customers or future customers see my work, and the products I use, from Eastwood, They highly recommend my company because of these, certain products, that are professionally used by myself, on their vehicles. Thanks Eastwood

Do they sell just the pin puller ? I need the puller only. Can&rsquo;t find them anywhere.&nbsp;

Asked by: Rick
Item 31150 is the Slide Hammer used for pulling the studs. https://www.eastwood.com/heavy-duty-slide-hammer.html
Answered by: Bart

Just wondering what kind of warranty this product comes with

Asked by: Josh wade
This item has a 5 year Limited Manufacturers warranty.
Answered by: Kelly H

Can you use Dent Pulling Ring Washers instead of the pins?

Asked by: Dave73
This product was only tested and designed for use with the stud weld pins
Answered by: ZachC

Can this unit be used for heat shrinking?

Asked by: Steve
Yes they can be used for heat shrinking. We did that in school where I started my auto body journey. Just put the gun to the panel without a stud and pull the trigger. When it gets hot, release the trigger and place a wet rag in the heated area.&nbsp;
Answered by: Brad H

Can it be used on aluminum?

Asked by: Jimmy
This can not be used with aluminum.
Answered by: ZachC

Are parts readily available for this product

Asked by: Arturo
We carry replacement pins for the welder. However, we do not stock replacement parts for that item itself since it is a Motor Guard tool they may have more parts available.
Answered by: ZachC

Can this be used to spot weld a floor patch or pan? Thanks

Asked by: Rosie
We would not recommend the stud welder to spot weld your panels together. A much better way would be to plug weld with a mig welder
Answered by: Bob G

where is the unit /kit made?

Asked by: Talon
This is made in the U.S.
Answered by: SeanW