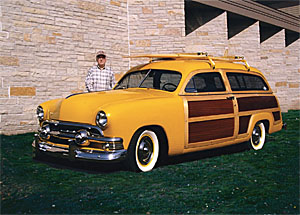 Simon Stevin was a Dutch mathematician and engineer who founded the science of hydrostatics (the pressure exerted by a liquid upon a given surface that depends on the height of the liquid and the area of the surface). He was also a bookkeeper in Antwerp, then a clerk in the tax office at Brugge. After this he moved to Leiden where he first attended the Latin school, and at age 35 he entered the University of Leiden in 1583.

While quartermaster in the Dutch army, Stevin invented a way of flooding the lowlands in the path of an invading army by opening selected sluices in dikes. He was an outstanding engineer who built windmills, locks and ports. He advised the Prince Maurice of Nassau on building fortifications for the war against Spain.

"So what," you ask? Well, among all of these engineering feats, old Simon is also credited with making one of the very first "Woodies."

This "Sailing Chariot" was basically a wagon on wheels that traveled on land by using the same sails you would use on a ship. The one designed by Stevin, covered forty-two miles in two hours, carrying twenty-eight persons and was used quite regularly.

Woodie, Woody, or Shooting Brake, whatever name you choose to use, vehicles with wood bodies possess character definitely missing in today's vehicles. At one time, every conveyance was made of wood: boats, chariots, wagons, trains, even airplanes. In their day, Woodies were often the most expensive cars offered by a manufacturer and many tallied impressive sales figures.

Woodies have always satisfied the need for stylish transport of people and parcels. The earliest woodie automobiles were utilitarian adaptations of the 'Rockaway' horse-drawn carriage and canopied express trucks. By the thirties, fashionable American woodie station wagons were pressed into service by lodges, inns and country clubs. At about the same time, wealthy landowners with country estates adopted the woodie for suburban transportation - frequently with a chauffeur at the wheel. In Europe, wood was utilized by coachbuilders of exquisite vehicles for the aristocrat.

During World War II, wood construction helped to save steel for critical wartime uses. After the war, the middle class found mass-produced woodie wagons perfect for family travels. The popularity of woodies for personal transportation peaked mid-century. By the late fifties and sixties, used car dealers had plenty of cheap, poorly maintained wood-clad cars. Surfers found these bargains perfect for hauling their long boards in search of the perfect wave. The rest, as they say, is history. A legend was born and today, woodies are among the most popular vehicles at auto shows.

Early in 1998, Tom Halfpenny decided that he wanted to create a custom 1951 Ford Woodie. He had two reasons; 1) that was the last year Ford sided wagons with wood, and 2) of all Ford products, the resale value was the highest for Ford Woodies.

Halfpenny's father was a Ford man, so Tom grew up with Fords - even learning how to drive in a 1948 Ford Tudor. The Woodie project was not the first that Halfpenny had completed, although the first customized job he had ever attempted. Prior to this project he had restored a 1931 Ford Victoria, 2-door, a 1937 Buick Special 4-door, and a 1967 Dodge Coronet 440 convertible. He was drawn to the "shoebox" styling which began with 1949 Ford models.

One Sunday morning, Halfpenny and his wife took a little after-breakfast drive near Wisconsin Dells, WI. Connie, his wife, spotted a car museum and they decided to stop for a tour. The owner had a list of cars for sale and on that list was a 1951 Woodie, located in Lake Mills, WI. A phone call from Halfpenny was made and a date arranged to see the car.

Once on the scene, Halfpenny found a car missing most of its wood and displaying some metal rot, not uncommon for a midwestern vehicle, although everything else was intact. The car had been in storage for 25 years. Prior to that it was used for display at a local restaurant. It needed a home. $6,000 later, it had one.

The project from start to finish took four and a half years to complete. The top was chopped 2-3/4 inches and the metal tailgate was swapped for a '50 wood tailgate. Rear sheet metal was reworked to set the license in the lower pan, install a Hagan gas filler door and tunnel '50 Ford taillights vertically. The hood was filled and headlights frenched. The original flathead was rebuilt to 1953 Merc specifications with dual Holley carbs, headers and Smithy mufflers by Adelmann's Engines. The front was lowered 2-1/2 inches with dropped spindles. The tranny is a stock 3-speed with overdrive and the rear end is a Mercury. Tires are Coker wide whitewall radials. This very un-Country Squire is a long way from the ocean, but Halfpenny added a unique wood rack with which to carry his 10-foot, 1965 long board, by Hanson. In Minnesota, it gets noticed!

All of the work put into the car was done locally and by vendors who had worked on other vehicles for Halfpenny. The metal work was done by Car Creations (Blaine, MN); the woodwork by Wood by Whiskers (Savage, MN). Bob's Upholstery (Hastings, MN) did the interior and Vescio's (Rogers, MN) did the custom paint job in Sunburst Yellow.

Already there have been a few offers (the highest, $71,000), but the car is not for sale and to date has only 345 miles on it. Halfpenny insures her for $66,000 through American Collectors Insurance ("ACI"). American Collectors specializes in collector vehicle insurance and agreed to insure the car for that amount, a value that reflects the car's true collector market value. Halfpenny is interested in receiving excellent customer service from all his Woodie vendors, including his insurance company - and so is extremely pleased with ACI. This is the second car he has insured with them.

American Collectors has been earning its reputation for outstanding customer service since it opened its doors in1976. The agency maintains a large pool of customer service reps so that customers can always talk to a real, live human being if they so choose. Instant, online quotes are also available at www.americancollectors.com

April 2003 will find Halfpenny and his car at her first show, the World of Wheels in St. Paul, MN. In June, Halfpenny will be at the Back to the 50's car show, now the second largest car show of it's kind hosting over 10,000 cars and 60,000 spectators. (The National Street Rod Association Street Rod Nationals is currently number one). Halfpenny also hopes to win the coveted Car of The Year (custom category) award given by the Minnesota Street Rod Association (MSRA). To find out more about the MSRA and Back to the 50's, visit www.msra.com.