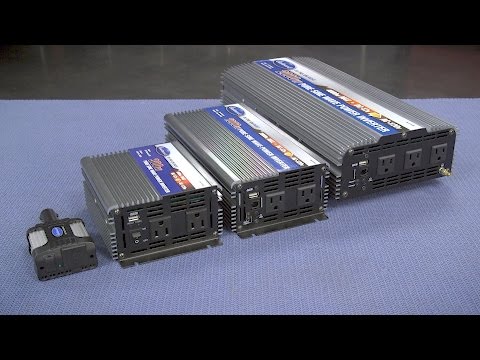 Many people use their car batteries to power tools and appliances when they're on a trip or when the power goes out at home. But how do they convert the DC power from a battery into AC electricity their devices can use? With a power inverter! Eastwood carries several power inverters for automobiles, trucks, RVs, boats and other machinery that use 12-volt batteries. Attaching an inverter gives you an additional power option and is less expensive than a generator.

The Eastwood R&D department has developed several power inverters for different energy and budget requirements. Our large inverters can produce up to 2,000 watts of continuous power and contain multiple 3-prong outlets and USB ports. This circuitry hardwires directly to a car battery for use in the shop, at a job site, on a camping trip or while on the road (if you have a safe place to mount the inverter). We also have small car inverters that connect to a cigarette lighter or accessory plug.

Using a power inverter can save you a lot of money long-term by not having to replace device batteries as much. It also guarantees you will have power in any vehicle that runs. Install one in your car that has a one-year manufacturer's warranty against defects. Our award-winning service means you have a place to turn if you need help using your new product.