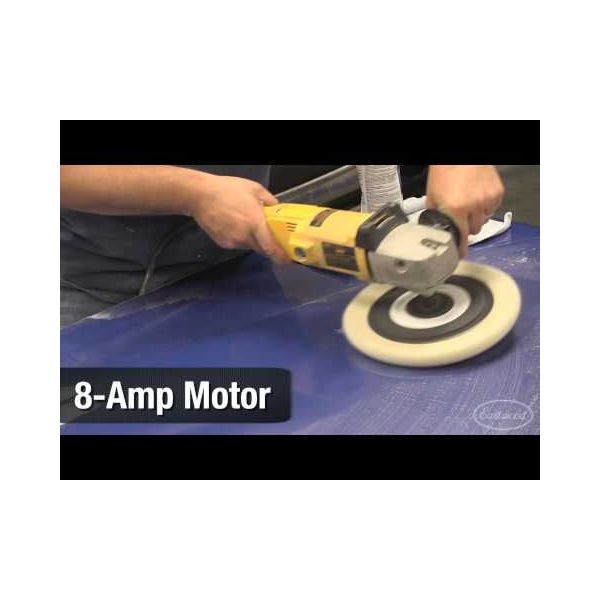 DeWalt® Variable-Speed Buffmaster Polisher gets the big jobs done with a powerful 8-amp, ball-bearing motor Choose your speed and start polishing or grinding—DeWalt's powerful motor won't hesitate, no matter the speed, no matter how loaded the pad, no matter how hard you lean on it.

Rated 3 out of 5 by davy from Corvette acrylic lacquer I used this Dewalt #849 to cut and then polish the black lacquer paint job on my '69 vette...after waiting for 120 days for it to cure. I had only ever used a CP pneumatic polisher before, which was a little lighter weight than the Dewalt but way noiser and that air hose draped over my shoulder was a real drag after hours of work. And of course more expensive to use with the air compressor running constantly. This Dewalt is a pleasure to use! The motor does not bog down from whatever speed you have it set at, no matter how loaded the pad is with compound or how hard you lean on it. And the variable speed feature works just like a variable speed drill. Any internet search will usually turn up that this polisher is THE choice of professionals. Lest you think this is one trick pony, and it can only polish paint jobs, think again. It also doubles as a 7" grinder. I wouldn't recommend mounting 9" grinding wheels as it doesn't have enough power for such a large wheel...leave them for the industrial grinders. In conclusion, this Dewalt isn't big, heavy and clunky like your father's old craftsman 2-speed grinder/polisher. It is a joy to own and use. I highly recommend. BTW, I'm an ASE re-certified refinishing tech for 15 years.