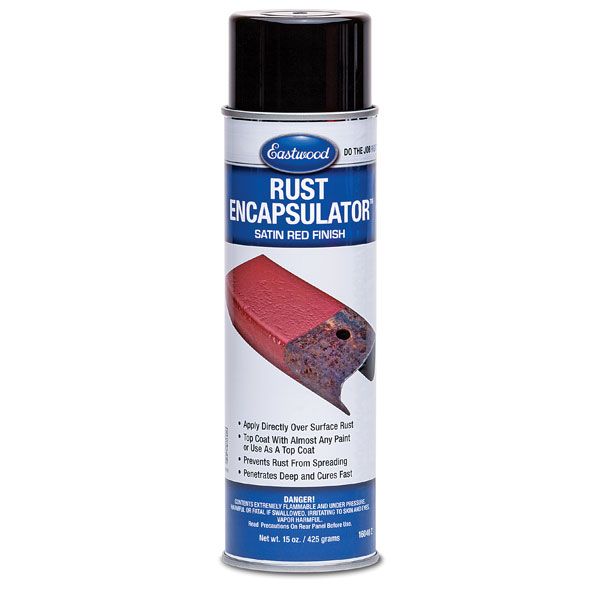 
Eastwood Rust Encapsulator has been tested by an independent lab to be one of the most effective rust-preventive products yet (tested to 500 hours in a salt-spray chamber). Red Rust Encapsulator is a great primer for floor pans and other underbody parts. It fills tiny pin-holes and surface irregularities, and is compatible with lacquer, enamel and urethane topcoats (including Eastwood Chassis Black). For the absolute ultimate rust remedy, first brush or spray-on Eastwood Rust Converter, then prime with Rust Encapsulator. One 15-oz. aerosol covers about 10 sq. ft., and contains no isocyanates. Heat-resistant up to 400 degreesF. Made in the USA.

(Q) Can Red Rust Encapsulator be applied with the Undercoating System?
(A) Technically, yes, but this application isn't recommended because Rust Encapsulator requires surface to be free of grease, oil, and loose rust. The best product to coat inside box sections is the 16017ZP Heavy-Duty Anti-Rust (Qt.). This waxy, oily product flows into pinch welds and through rust to seal surfaces from contact with moisture and air, but cannot be painted over, so it's only suitable for inside box sections that don't show. Use lacquer thinner for cleanup.

Work in a well-ventilated area when applying this product. The use of a respirator is recommended. Shake vigorously for 2 minutes before spraying.

In places where little or no surface prep can be done, our 16017ZP Heavy-Duty Anti-Rust (Qt.) is actually a better choice for applying into blind areas such as box sections. Buy 3 or more quart cans and save!

Use a wire brush to remove loose rust, scale and paint, and remove dust, grease and oil deposits. Feather surrounding paint with 220-grit sandpaper. Shake can for at least 2 minutes once the mixing ball starts to rattle. Hold the Rust Encapsulator can 10-12" above surface as you spray. A single coat dries to the touch in 20 minutes, and is thoroughly dry in 3-4 hours at 68 degreesF. For greater durability, a second coat can be applied 1 hour after the first. Allow 6-8 hours after the last coat before applying topcoat. Use over or under body fillers.